Revisiting a recipe from over 10 years ago. I really enjoyed this sauce the first time I made it so I’m surprised it took me this long to come back to it. Here’s a photo of the original from 12 years ago. Seems like I haven’t gotten away from that black background. 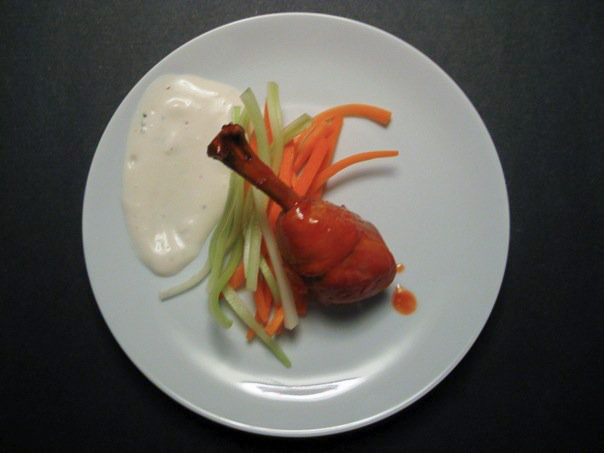 For those of you not from the western New York region loganberry is a common drink round these parts. It is a berry drink that tastes like it has so much sugar in it that you’ll be getting a visit from Wilford Brimley. Loganberry’s are a cross between raspberries and blackberries, they were developed in 1930 something or other by a judge in California. So why they are so popular in western New York is beyond me, I looked it up earlier but don’t remember what it said. Could I look it up again? Of course.

In a pot simmer the loganberry until reduced by around 75% (Around 1/2 cup reduced). It should have a syrup consistency. In a separate sauce pot bring hot sauce to a simmer and remove from heat. Add in the loganberry syrup and tabasco sauce. Whisk until combined. Cut butter into pads and slowly add to sauce continuing to whisk until all butter is combined. For the wings deep fry at 375ºF for around 11-13 minutes, remove from the oil and toss in a bowl with the sauce.

Since this is kind of a shorter blog today I figured I would include the recipe for the blue cheese dressing I made because who doesn’t like blue cheese with their wings.
Blue Cheese Dressing: Yields: 1 1/2 Pt

In a bowl whisk together the mayo, sour cream, lemon juice, garlic, and butter milk. Next fold in the crumbled blue cheese and mix until evenly combined. If you would like a thinner dressing you can add a little more buttermilk to thin it out.