So for whatever reason I have been on a slight pastry kick, which is odd for me considering that I have always disliked baking and pastry. Not to say that I am bored with cooking, I think I am just enjoying a new world of colors, or non colors and the ability to mess around with new flavors. Its hard to go online and not be amazed at some of the desserts that people are putting out. The colors, shapes, flavors, everything is intriguing to me. So for the past couple weeks I have been working on some entremets. I feel doing entremets is a good stepping stone to experiment with multiple flavors, textures, and plating ideas. And I’ll be honest they all had their hiccups and missteps but that’s how you learn! So for this post I will be explaining things I learned, what went right and what went wrong.

The first entremet I wanted to do a version of key lime pie. I had a couple ideas in my head of how to put it together but was missing some key pieces to bring it all together. Abby got these awesome donut molds so I wanted to use them for their size and shape. One of the main things I have learned with making these is patience, making sure all layers freeze before setting the next layer in. I had made a lime curd for the filling, but as my first mistake it wasn’t thick enough for the end product. The next mistake was doing a chocolate shell, not that I have a problem with the flavors, it was just too thick and made the dessert not eat well. The original plan for the dish was to make a meringue cookie base and set the entremet inside however it didn’t work out so I crumbled it up instead, but that is my favorite part of cooking, is tweaking something that wont work into something else that will. The final mistake I made with this one was not putting a filling in the donut hole. A missed opportunity to add another component, should have filled it with a coconut mousse, instead it was filled with a copious amount of mirror glaze, not appetizing. But that is what it’s all about, experimenting and finding out what works and what doesn’t. I think the flavors worked well, it tasted good, but it did not eat well which is a big issue. The main changes I would do to this one would be no chocolate shell, do a filling in the donut hole, and figure out a better way to make the meringue shell. 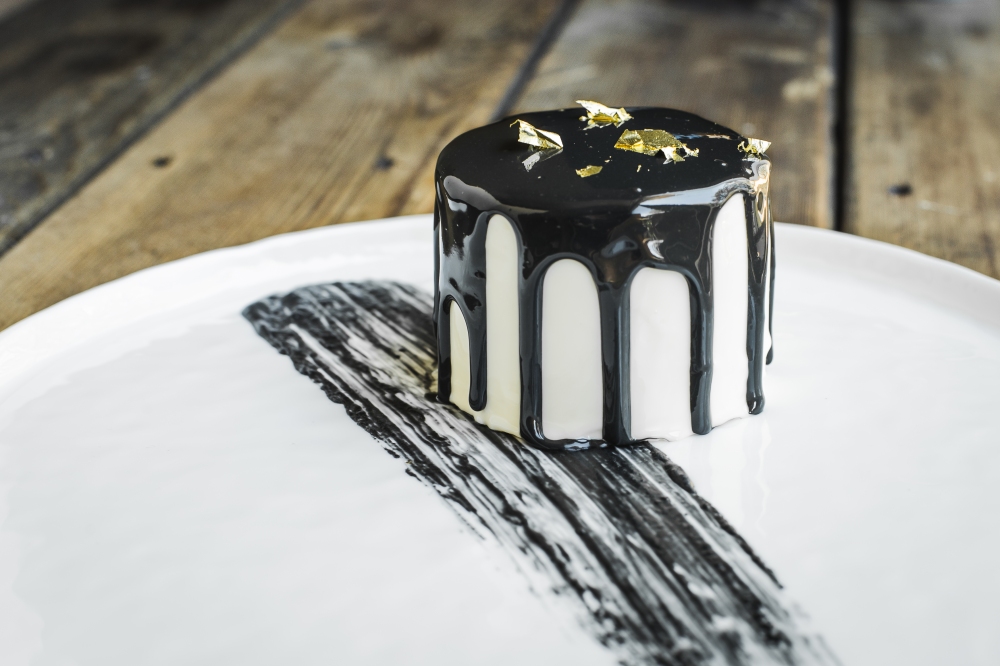 The second entremet I wanted to fix the issue of the curd and go with a cake base instead. I was very happy with how this one turned out compared to the first but it still had its issues. For one there wasn’t enough components to really make it an entremet, it basically ended up just being a tiny cake, but it definitely ate better than the first. For this I made a sheet cake and used a cutter to punch out the circles. You want to make sure it is frozen so you get nice clean edges. Another thing I learned with this one was I should have use a less crumb type cake recipe, because of this the mousse ended up having some pockets on the edges and it wasn’t as clean as I would have liked.

When I first did the mirror glaze it looked really rough so I ended up doing a buttercream layer to give it some nice smooth sides. One misstep I learned from the key lime entremet was the temperature of the mirror glaze. Not taking into consideration that the shell was frozen the glaze cooled very fast and didn’t allow me to work with it. You usually want the glaze to be around 83º when pouring, so that in mind I poured over the frozen cake at around 87º and it worked much better. Overall I think this cake ate much better and worked out, it just needed more components to make it a true entremet.

The third entremet I feel things really came together. Looking at the first two I knew what needed to be changed and some tips I learned along the way to make it better. Abby had made some cheesecake in the donut molds and I was planning on doing a carrot cake entremet so she suggested to use the cheesecake in place of the cream cheese frosting. I knew for this one I needed to fill that center with something so I made a pecan praline, it gave me an opportunity to add the nut element and act as another component. For the carrot cake base I made the cake, let it cool and then crumbled it. I then took it and pressed it into a ring mold and baked for another 10 minutes to give it a little crisp and help hold its form. I messed up the mirror glaze a little on this one again and didn’t work fast enough to have it all settle evenly like I wanted but the final effect is kind of cool with the raised top. Overall I was very happy with how this one ate, it’s flavor combinations, and overall look. 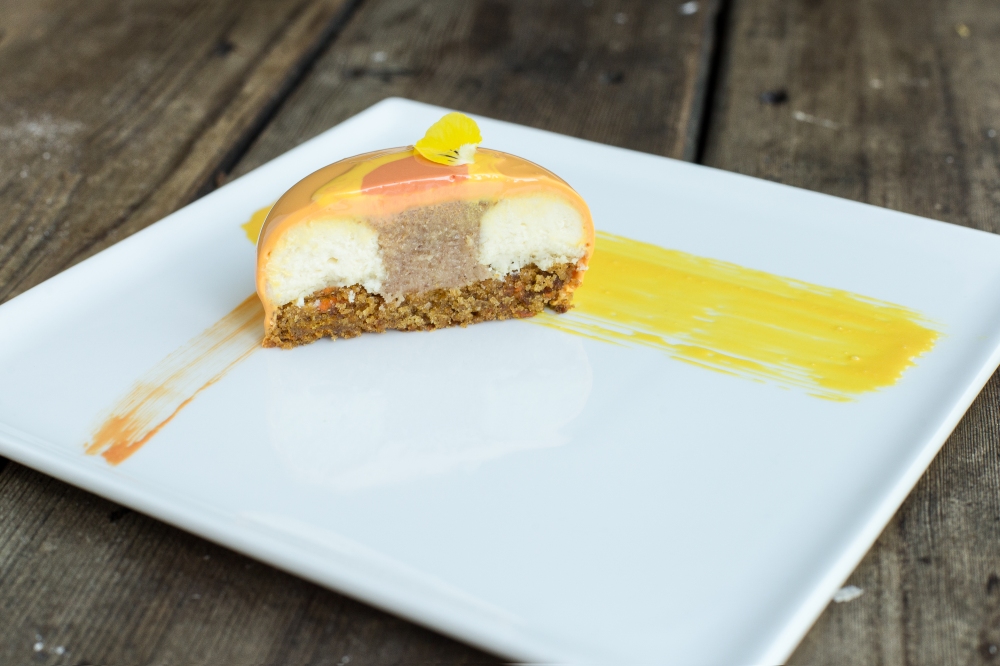 It has definitely been a learning experience and I can see the progression, I just need to keep working at it and learning some new tricks to make them a little better every time. I am excited to keep experimenting and come up with some more. I hope some of these tips and insight are helpful, and even if you are not planning on making entremets the one thing I hope you can take away from this post that even if things don’t turn out the way you want to just keep at it, learn, experiment, find out new ways to succeed and further your knowledge and experience and you will absolutely see progression. As always thank you for reading and if you have any questions feel free to ask!